My second Dreamforce is over and when I compare it to the first one, it was completely different conference. Last year I went from session to session, didn’t have time to meet many people (and reason as well), just wanted to suck as much information as possible, as I knew that I won’t have time to watch recordings.

This year the plan was different, but it cannot be seen from my agenda, which was packed from the beginning till the end. I planned to meet a lot of people and my plans changed during the week as well. 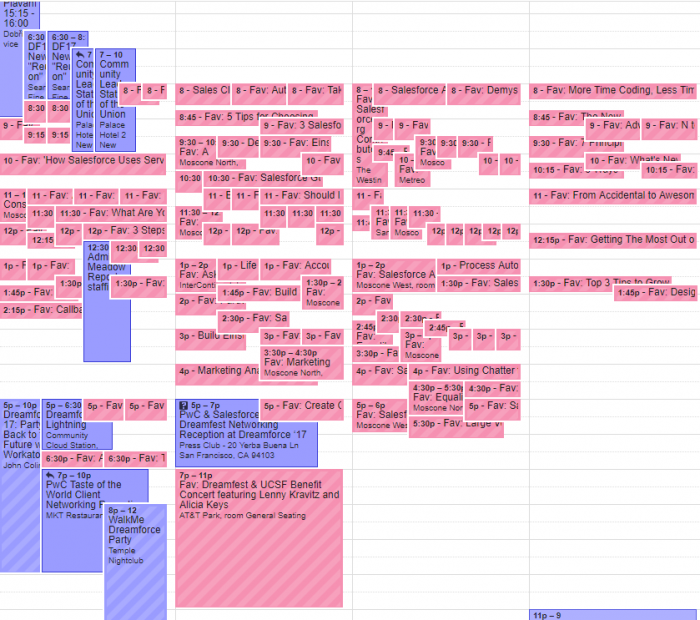 It all started on Sunday, when I attended happy hours for admin track presenters. What a great welcome to San Francisco from Mike Gerholdt and his team! I met my co-presenters for the first time in real life, which was super cool as well, and some other people I knew just from the internet so far. Women’s network event was next on my agenda, I wasn’t the only man there and was pretty interesting to see the topics. I think we heard enough of non-equal pay and men only top management, but listen how differently they manage finances and some other topics was quite eye opener. A lot of it – I feel – wasn’t about someone else do something bad or want to push them out, but rather about their own underestimating.

Monday is about meeting people

I started Monday with the DF17 Newbie „Reunion“ Breakfast organized by Eric Dreshfield, all money went to Project Night Night, so not even I got a great breakfast but also helped a charity. Great feeling 🙂 Quick move to the State of Union – gathering of user group leaders from all over the world. Great to see some who do it for 8+ years while other started just a few months ago. We are active in 72 countries and have 36 % y-o-y growth, impressive.

In the afternoon I staffed the Admin Meadow Reports stand. 3,5 hours went super quickly, I answered some basic questions and played with the new Lightning Report Builder – super awesome cool!

As a process automation presenter I’ve been invited to the Lightning Flow Builder Happy Hour. I love all these roadmap sessions and this was really great. The future for Flow Builder is bright! Brian already wrote about it, we cannot share any screens or timeline (which is pretty long), but it looks super awesome and I’m really looking forward to it.

I tried to get to the Workato party – which was easy, as UG Leaders got VIP access – but was unable to get to the bar for any drink. So at least I played the biggest Pacman and enjoyed it for a while. Off to bed early, jet lag kicked in.

Tuesday is about sessions

Tuesday was session to session. I missed the Community Cloud Roadmap as well as NPSP Roadmap, walked all the way outside Dreamforce campus for the Pardot Implementation Pitfalls, which was great to hear and also fantastic to meet Pardot Product team. Glad to hear that projects take usually 90 days while there is only a few days of work. All those IP warming, designs and so on takes a long time.

Simplus trail to platinum partner in 18 months was also motivational. Did I get it right, that they give $50.000 payrise to CTAs? Custom made suits for any architect is nice touch as well, don’t expect anything like this from corporation.

Lightning Experience Roadmap looks really promising. Forecasting is beautiful, we will be able to personalize navigation menu, brand Salesforce to our needs, have macros on any object (and the recorder is really intuitive), path will support validation rules and mandatory fields (just have problem with this on one project). Pardot Roadmap even better – Lightning support, ability to build Engagement Programs and List Emails straight from Sales Cloud, possibility to send prospect through the same Engagement Program more than once (hey, I need it on one project right now!) and more to come. This is the reason why I really like roadmap sessions.

Tuesday night? Lenny Kravitz and Alicia Keys was the plan. But before it the Lightning Bolt Trailblazer Awards with free drinks, food and ice cream as well as a few matches in table tennis. Jet lag kicked in, so I survive most of Lenny and went to the bed at 10pm.

Wednesday, my big day aka presentation. But in the morning I didn’t want to miss some sessions. Reports Roadmap was another great session full of bright features. Lightning Dashboard Tables are in beta and are super easy to set up. Subfolders, Field to Field filtering, Reports Drill-Down (super cool, we almost don’t need Analytics anymore), Row-level Formulas, Export to PDF, Dynamic Report Types (??), ability to move custom-formula field on reports (yeah), allow fields to be renamed in reports and more and more. We were applaud every 10 seconds or so.

And my first „presentation“ at Dreamforce. I’ve been selected for the Process Automation Showdown (with 7 others) and we had 2 sessions, 4 of us on each presenting one of our great Process Builder/Flow usecases. When we did the dry runs I felt my flow is almost too easy (how to publish to Chatter group on Communities), but I was assured that we have a great mix. Leyna did a great job in working with the audience, the „I’m just admin as you are admins“ works great and from the faces I got from the audience it looked like Flow is too much for regular admin. A bit surprise to me, but good to know for the future, hopefully will have chance next year to compete again. 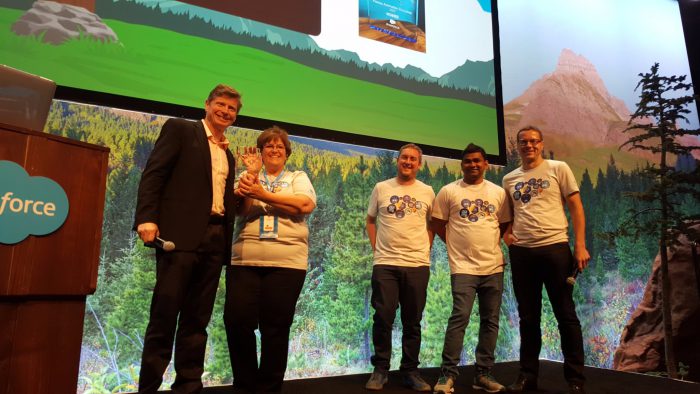 Super early bed time today – jet lag, enough of meeting people, no party planned. I just stopped by for some quick dinner and at 8pm was in bed, completely exhausted.

Thursday – last day of Dreamforce – and I’ve been session to session again. 5 ways how to build Lightning Components Fast with a great „we don’t have much time, so I’ll write just one line of code and look – makes it 200ms faster“. Difference between ! and #, which I saw in a few examples but never dig down what is the difference.

I was ready to meet people again. Hunted down Christian and spend some time chatting, bump into Rene and got invite to afterparty, where I met Barry (whom I missed at SurfForce) and a lot of other. This was the perfect end of Dreamforce and as I realized probably the more import reason why even go there. I’m unable to make connections at Dreamforce, it is just too big for me. But I’ve been to a few smaller events during the year and make some new friends and it was really great to see them here again. Hope the list will grow and grow, it is a great feeling.

There were plenty of other interesting things at Dreamforce – myTrailhead (will be available in late 2018) and mySalesforce look really great and is logical extension of what Salesforce did so far. Not sure how popular they will be in Czech Republic as both of them are extra money, but would be great to see customers adopting them. I’ll try to find some time and check at least the presentations for sessions I bookmarked, because there were reasons why I wanted to attend them.

Back to San Francisco next year (September 25 – 28)? Will see, but most likely yes, after all it isn’t that expensive when you go on budget. And as I saw this year more people stay in a hostel, I met no one last year and about 7 people this year only in the hostel I stayed in. 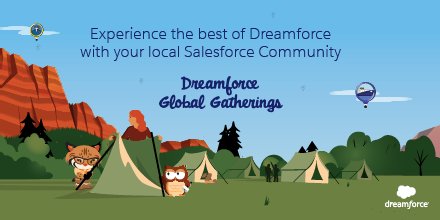 Dreamforce is over, but Global Gatherings not. If you want to find out what is it about and what people learnt there just attend your local meetup, meet with other people and find out. In Prague we will meet on Thursday November 30, most likely it will be held in Czech only.

Would Dreamforce be too big for you, there are plenty of smaller events – London’s Calling in February, dreamOlé in April and I’m pretty sure we will hear about others during the year. Go and attend, it is worth it!